I think prisoners should be allowed to vote, so I’m probably a bad person to.ask.

I would let prisoners vote if they weren’t fat.

Should puerto ricans be allowed to vote? There are about 4 million of them. They pay Medicare and social security but no federal income tax. Which is probably what 40% of Americans pay.

I have to dodge your question because I think the Puerto Rico arrangement is stupid and they should be given the ultimatum, “become a state in the union or become your own country”. As it stands, they are citizens of a country they can’t vote in and which Trump can treat like a foreign nation when hurricanes hit. Much of that is their own fault for wanting their current weird arrangement.

I can still vote then right? 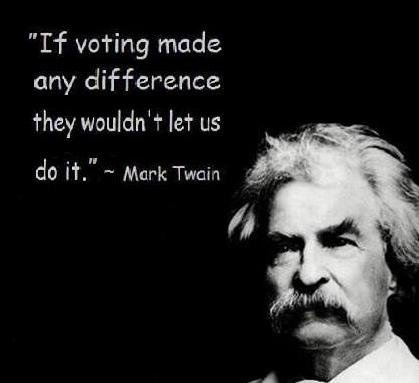 I have no power, Mark. You can still vote unless I become king of the world somehow.

Can you do something about your body?

Then you would not allow me to vote?

No. I would let you vote if you lost some weight, though.

Sorry. No can do.

I’ve changed my mind. Fat people would be allowed to vote as follows. If I were king of the world, I would set up a system.

There would be a test to assess knowledge and intelligence. It would include questions about history, civics, politics, math, science, chemistry, literature and other topics. It would also include some problem-solving questions. There would also be a physical test including weight and BMI measurements among other things. Everyone would take these tests if they wanted to participate, from voters to candidates.

A candidate’s scores would be shown on every ballot so voters would know if the candidate was a moron or fat or both.

So middle ground for you is something like:
____=ice cream

No, I don’t think you need to amputate your legs.

Did you need a second opinion?

That’s really unfair. If you idle a car and breathe in its exhaust it will affect your intelligence as well as causing the toxins to store in the bodyfat.

Your lungs don’t even work. And you cannot burn fat. With your entire body doing 6 hour workouts every day for a month you could not burn a a kilo or even a pound of what I have as bodyfat

What are you contrasting for this BMI? Muscle to Fat?