Thank you, Reg but I don’t feel I’m being foolish or stubborn. I have taken time and thought through my options with this stock. It’s not a good stock to be in and it’s going to take years to recover but I can sit and monitor it. By holding it, the only way I can lose it all is if it goes belly up.

I’ll assume you prematurely sold out. If that’s the case, you can’t really complain about the performance of fluctuating stock. Good luck with Google. It doesn’t pay a dividend so you yield zero in that respect but it’s a strong stock and should perform well in the market.

I’ll assume you prematurely sold out. If that’s the case, you can’t really complain about the performance of fluctuating stock.

Nope. I bought into Ballard Energy about 25 years ago, back when hydrogen fuel cell cars were going to be the future. I paid $107. The stock tumbled to $60 and I bought more thinking it couldn’t go any lower. I sold at $7. The stock was delisted shortly thereafter.

Then about 10 years ago I bought into some LED street light manufacturer that Adam linked me to. LED street lights were going to be the future and this company (the name of which I don’t even remember) had a bunch of flattering stories floating around in the tech press. Less than a year later they were insolvent, delisted and I lost everything I had invested.

I sold my last Google stock 5 years ago. I own mutual funds these days that other people manage. They are better at it than I am.

Gosh, Reg. I don’t want to put you on the spot but how did your Google stock perform because I’m thinking you prematurely sold out.

It has doubled in those five years but so have the rest of my investments. I’m still not comfortable with my retirement though. I’ll be fine if I die in a decent amount of time but if I’m unfortunate enough to live longer than I expect, I had better earn a bit more cash in the coming years. Of course if the Canadian economy crashes, all bets are off.

Chinaman to broker - That stock you sold me is losing money. What’s going on?

At what time do you go to the Chinese dentist? 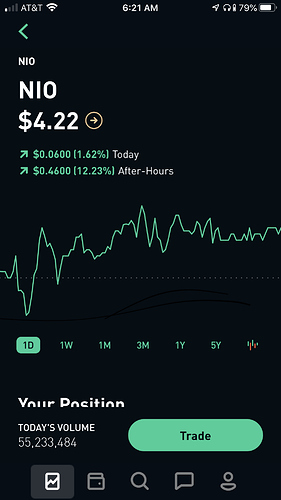 Nio's stock jumps on heavy volume, in the wake of Tesla's break-out rally

aww, oh well at least its not going down?
always look on the bright side of life la la lala lala la la

It did go down but on the bright side, I’m not.

thats bad news for your husband…

There’s hope for you, Michele. Apparently there’s a deal on the go with the local government and the stock is spiking.

I think NIO is having their earnings call.

NIO is at $3.89, lowest I can remember seeing. Tesla just announced they’re coming to Colombia. I won’t buy one but I hope they do well. Their prices are very high for Colombia though.

They are at 4.02 which was a new high for them just yesterday, although I am down from last nights gain.

They claim they are coming to the Oklahoma/Texas area also. Electric vehicles are not nearly as impressive as self-driving vehicles. I played a game of chess driving home the other night.

It hasn’t been perfected because I almost ran over cones in the road. Apparently, it doesn’t sense small objects in the road, even though it does sense other vehicles.

I won’t buy one but I hope they do well. Their prices are very high for Colombia though.

Good. The fresh air and exercise will do you good. Piggy back your wife and build