neither one is me
please discuss

In Chile we eat a lot of Wild Pig… mostly in the south. Nothing more delicious. 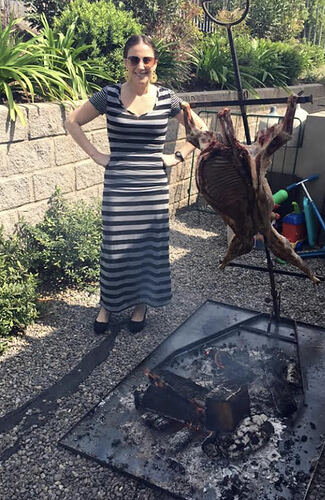 You look amazing, Ferni. If I ate that it would go straight to my hips.
Merry Christmas.

LOl that pic is like 5 years ago… but thanks

KFC restaurants nationwide will add Beyond Meat's plant-based chicken to their menus, starting Monday for a limited time.

Would you try the fried chicken substitute?

I wonder how long before most food is replaced with lab created nutrients. I know that’s already happened, but I mean food becomes a luxury for say 75% of the population. I eat berries every day. I wonder when they will become so scarce that I’ll eat berry substitute.

I would definitely try it but it looks deep fried, so what’s the point? Plant based chicken fried in animal fat.

it’s weird to some people

Looks good but unhealthy. Well, the eggs and bread look good. The tubes of meat don’t.

sausages! lol are you related to silky!?

I doubt it, but then again, I am adopted so who knows?

you are either very brave or have a death wish

Looks good but unhealthy. Well, the eggs and bread look good. The tubes of meat don’t

The amount of butter I put on it would make it unhealthy too. But the Seattle’s Best water front sourdough makes up for it I think. (No not really, just a lie I tell myself).

Hey now! Johnsonville Vermont Maple saugage is awesome!! I’d eat the whole pack if the house grimlins didn’t steal some while I am cooking lol.

Thick cut pepper bacon is good too with it.

you are either very brave or have a death wish

Now now now, I never said I would meet him in person, did I???

sausages! lol are you related to silky!?

Never made it Holly. I agree with Reg.

I personally would not eat the meat.

Vegan or vegitarian, or just pork products in general?

The only things Muslims and Jews agree on is to not eat pig flesh. I try to avoid it but I’m not “religious” about it. I eat bacon a few times a year when there’s nothing else decent on the menu. I would never cook it at home. I am not vegan or vegetarian but I only eat meat a couple/few times a week.

Pescetarian, but not very strict. I don’t buy meat, but I’ll eat it if nothing is available. If my wife buys it, I’ll cook it. The damage is already done at that point and throwing it away is worse than eating it.

So, generally not for moral reasons. I don’t eat steak at all though. I haven’t for probably 15 years. I probably have not had a hot dog for over 20. I didn’t like hot dogs and cannot eat steak. I can eat ground beef though. So if a burger is already cooked at a cookout, I’ll eat it.

My favorite foods are…

My favorite drinks are…

Water
Smoothies
Anything with ginger including moscow mules
Most tea
Riesling