Actress Is Ashamed She Was Born ‘White’ And ‘Privileged’

Rosanna Arquette wears her liberal politics on her sleeve. On Wednesday she announced that she is ashamed to be white.

How long are you smart guys going to listen to your liberal allies spew this garbage before you decide to consider you other options?

Rosana Arquette, whoever she is, is foolish to be ashamed of her race and colour, but her motives are well intentioned. This is a common failing among left wingers.

Given the problems right wingers have been having lately, I’ll take it.

You will take it? That’s weird, Reg.

but her motives are well intentioned.

What is her motive? Is she trying to score something special with another race? Does she somehow have to be skinned alive to have respect in the world? What is she hoping to accomplish by denying her race? Self respect? Is that what it has come to with white liberals?

The only problem conservatives have is lies liberals tell.

There is no such thing as white culture. At least not to me. Do you think Bernie and Donald have a lot in common? Or have had similar lives? I have little in common with a professional skier from Norway. Or a redneck from Mississippi or Oklahoma.

Nice try shaming me in trying to feel guilty about being a liberal. Waste of time for you. I love my liberal views.

On the contrary. I’m trying to shame you for being white.

That’s interesting, Dan, because your Party demands white people be recognized as racist. The fact that you are isolating conservatives doesn’t mean you are excluded because you are not.
This is not a liberal or conservative issue. It’s a black/white issue first.

I am referring to not associating with white nationalists, when I say conservative racists. I don’t believe in white culture and I’ve never had anyone tell me that I should be ashamed to be white. And I live in liberal country.

I don’t believe in race culture in general. Maybe in small areas but throughout the world, I don’t.

I am referring to not associating with white nationalists, when I say conservative racists.

I think I know what you are saying.

I don’t believe in white culture

Not only is there no such thing as white culture, there’s no such thing as culture, period. There are languages and recipes and music. Reading too much into any of those is foolish. Trying to protect them in law is silly.

I did no such thing. Unless you consider yourself a white nationalist.

You did. Your Party has already impossibly branded every word Trump says as racist and anyone who votes for him is racist, therefore, I’m racist.
Isn’t that what your party demands of you and isn’t that exactly how it is?

I speak for myself. I don’t know that you are racist. Your president is and you seem to be ok with that. I don’t think that makes you a racist. That’s just my opinion. Racist is a word and can be interpreted differently, I suppose.

I seem to remember you once admitted here that you are racist.

Your party has branded us all racists unless we denounce Trump. I’d rather be thought a racist than join forces with the evil agenda of the Left that is infiltrating the Democratic Party.

evil agenda of the Left that is infiltrating the Democratic Party with.

It was the Russians who put trump in power. You would rather be aligned with them?

Your party has branded us all racists unless we denounce Trump

It was you who admitted to being a racist.

This whole idiotic line of debate is a textbook strawman. 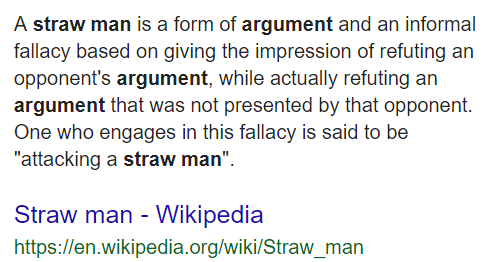 Set up the false argument that Democrats hate whites. Argue that point, even though Democrats have never hated whites. Win the debate against anti-white hatred, high five yourself and enjoy some refreshing koolaid. Repeat until national bankruptcy.

It was the Russians who put trump in power.

Where did that come from? Source?

Reg, I’ve heard your straw man argument/accusation before. I don’t care. They are doing it. It’s all over the news. It’s everywhere.