They are doing it. It’s all over the news. It’s everywhere.

Better hide under the bed. White-hating extremist democrats may be planning a mass shooting.

I agree. Just ask the fine people in Dayton, Ohio.

I agree. Just ask the fine people in Dayton, Ohio.

There is no evidence at all that the Dayton shooter was politically motivated or even politically opinionated. He appears to have been a simple nutjob.

Here’s a nutjob for you. 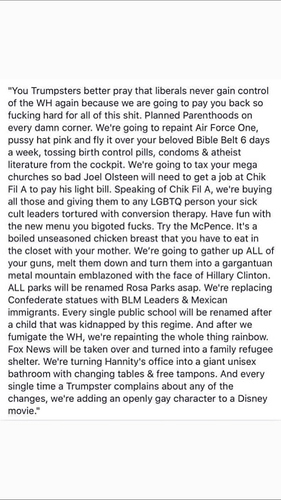 What is that? I assume you didn’t fact check it.

More washed up celebs? This is significant how?

Because, while their hatred is for Trump, they are sending messages that they intend on punishing the citizens of this country with the most vulgar, vile, evil agenda our minds cannot even begin to comprehend.
Tommy Lee is trying his best to draw us a picture. Go ahead and bury your head in the sand. Why should today be different than yesterday.

There is no such thing as white culture.

This is foreign to me. I don’t know what you are talking about.

Tell that to the Chickasha Nation.

What do you mean you don’t know what I’m talking about?

I mean I don’t know what you are talking about. Feel free to expand on it.

I think I already did when I said myself, roger Federer, Donald Trump and bernie Sanders have nothing in common.

“We believe in facts, not truth.” (Giggle*)
“poor kids” are just as bright as “white kids,”
“Those kids came up to see me when I was Vice President.”

This really is the best you can do.

I personally hope Biden loses. I am warming up to Elizabeth Warren. I would love to see her beat Trump but I fear she might lose like Hillary.

That is a legit fear.

Order of how I don’t want it to go…

Warren is much closer to Sanders than Clinton was and they actually seem to get along. Maybe because neither is a frontrunner at this point. They are both asking me for money, lol. Hopefully if one of them beats Biden, the other one grabs their votes. And they pick Buttigieg as their running mate.

I think Biden or Bernie would win. I just don’t think Biden will do anything once he gets there. He will improve the morale of the country and that can count for a lot. Other than that, he probably won’t do much. I’ll vote for him if he wins the primary.

NH votes in the first primary on February 11th. Bernie will win. Hell, Bill Weld might win if he actually runs against Trump, lol. Hopefully, the NH victory gives Bernie a boost. Easy decicion for me.

Puerto Rico should have reps and senators and vote in the election. They vote in the primary, but not the general? Especially, if DC gets to vote.

3.2 million people in Puerto Rico. Less than 1 million in Montana.

The dems almost never vote for the best candidate. Certainly not in any election I’ve voted in. I can’t speak for the Republicans.

The dems almost never vote for the best candidate.

I agree. Your last great President was JFK.

Sanders-Bribery is a useful tool.

Booker-Murder, violent crime, unemployment, and taxes all rose dramatically under his stewardship. His chances of winning seem realistic, imho.

Gillibrand-I don’t know anything about this woman. I haven’t followed much other than she may Clorox the White House which is great if she’s applying for a housekeeping position.

How is Sanders guilty of bribery?

Bill Clinton was a better president than JFK.

I’d say FDR and Wilson were the best of the progressives.