So why can’t we get pictures of all the crap they supposedly left behind when we were supposedly there?

Because they are probably buried deep in the cracks. Why don’t you hop a rocket and go see.

Just took this photo from my balcony a few minutes ago. 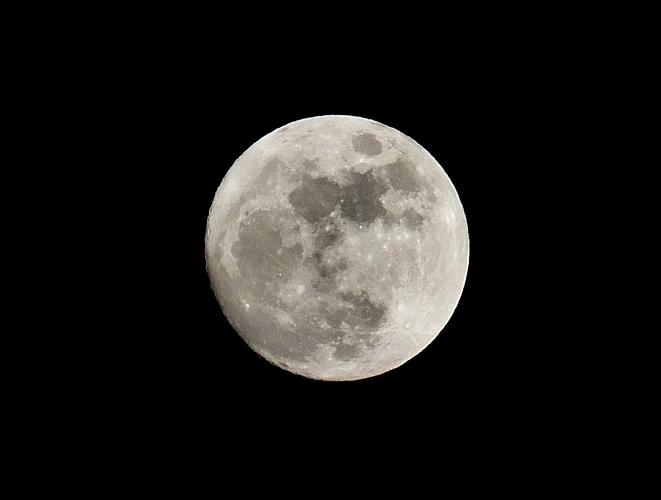 I bought a calendar at a bookstore for a discount since it was already past half the year. It just happens to be a lunar calendar.

That shouldn’t be a full moon until tomorrow.

Somebody didn’t tape that over the lens I’m assuming. Or your eye.

That picture is from a few hours ago. I took the camera out on the balcony, stuck it on a tripod, and played with exposure settings until I got a decent result. To my surprise, my best results were at fast shutter speeds and small apertures. There was just too much light coming off the moon tonight to get good results on long exposures.

So why can’t we get pictures of all the crap they supposedly left behind when we were supposedly there?

spy satellites 100 miles above the earth can read your license plate
don’t ask me how i know
the moon is a quarter of a million miles away
how can we make 100 fit into 250000?
i know, let’s multiply by 2500
say a car plate is one foot wide
why can’t we see the half mile wide billboard we supposedly left on the moon when we supposedly went there?
that’s what i want to know

Bet it works in a microwave. Never tried, though.

that information is hidden in books

Have you read the Koran?

Have you been reading poetry?

Allah as a lunar deity

From Wikipedia, the free encyclopedia

(Redirected from Allah as Moon-god)

Jump to navigationJump to search

The postulation that Allah (the name of God in Islam) historically originates as the moon deity Al-Lat (who was worshipped in pre-Islamic Arabia) originates in early 20th-century scholarship, most prominently advocated by American evangelicals from the 1990s.[1][2]

The idea was proposed by archeologist Hugo Winckler in 1901. It was widely propagated in the United States in the 1990s, first via the publication of Robert Morey’s pamphlet The Moon-god Allah: In Archeology of the Middle East (1994), eventually followed by his book The Islamic Invasion: Confronting the World’s Fastest-Growing Religion (2001). Morey’s ideas were popularised by cartoonist and publisher Jack Chick, who drew a fictionalised cartoon story entitled “Allah Had No Son” in 1994.[3][ original research? ]

Morey argues that “Allah” was the name of a moon goddess in pre-Islamic Arabic mythology, the implication being that “Allah” as the term for God in Islam implies that Muslims worship a different deity than the Judeo-Christian one. The use of a lunar calendar and the prevalence of crescent moon imagery in Islam is said by some to be the origin of this hypothesis.[4] Joseph Lumbard, a professor of classical Islam, has stated that the idea is “not only an insult to Muslims but also an insult to Arab Christians who use the name ‘Allah’ for God.”[5]

Do not prostrate to the sun or to the moon, but prostrate to Allah, who created them.
https://en.wikipedia.org/wiki/Allah_as_a_lunar_deity

remember when kennedy said let’s go to the moon before the decades is out and put a four mile wide ad for coke on it so that earthlings with binoculars can say “nah, that looks like cheese”
me neither

remember when kennedy said let’s go to the moon before the decades is out and put a four mile wide ad for coke on it so that earthlings with binoculars can say “nah, that looks like cheese”
me neither

Remember when they called that a cheesy conspiracy theory. Me neither.