https://www.google.com/amp/s/www.washingtonpost.com/opinions/2019/09/27/how-right-wing-media-will-shape-impeachment-battle/%3FoutputType=amp
“And everything that happens will be shaped by the calliope of craziness that is the right-wing media.”

I though that was an interesting statement and it made me think about how much the media spins the stories to favor the Left.

I thought the Washington Post was a legitimate newspaper. 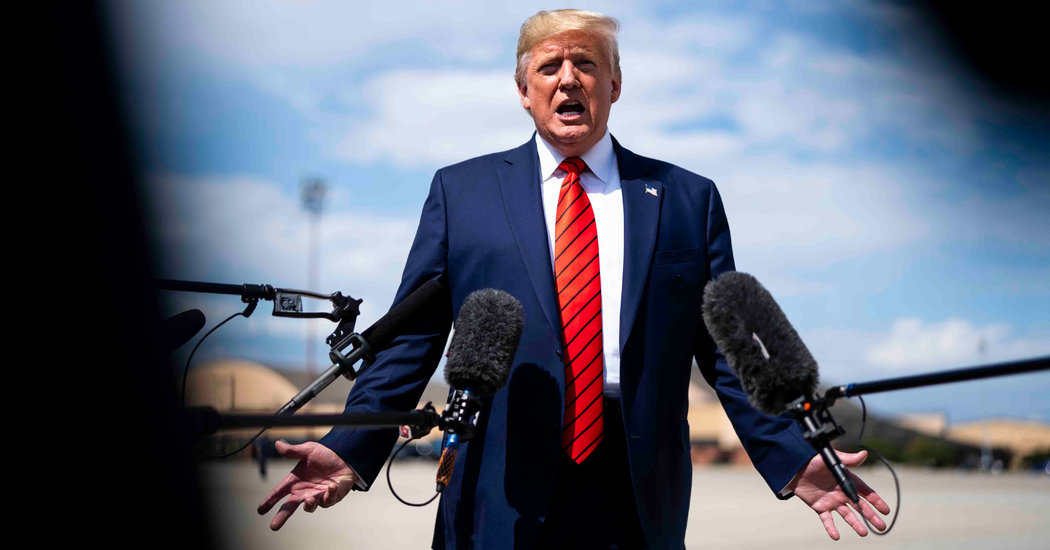 Opinion | When Trump Feels Cornered, He Gets Worse

Trump is disturbed and growing more so. The narcissist cannot bear not getting away with whatever he wants.

But then I also thought that about the New York Times.

Trump 2020 plan: New threats to press freedom and trust in media, pillars of...

'Our liberty depends on the freedom of the press, and that cannot be limited without being lost,' Jefferson said. Journalists must not stand down. 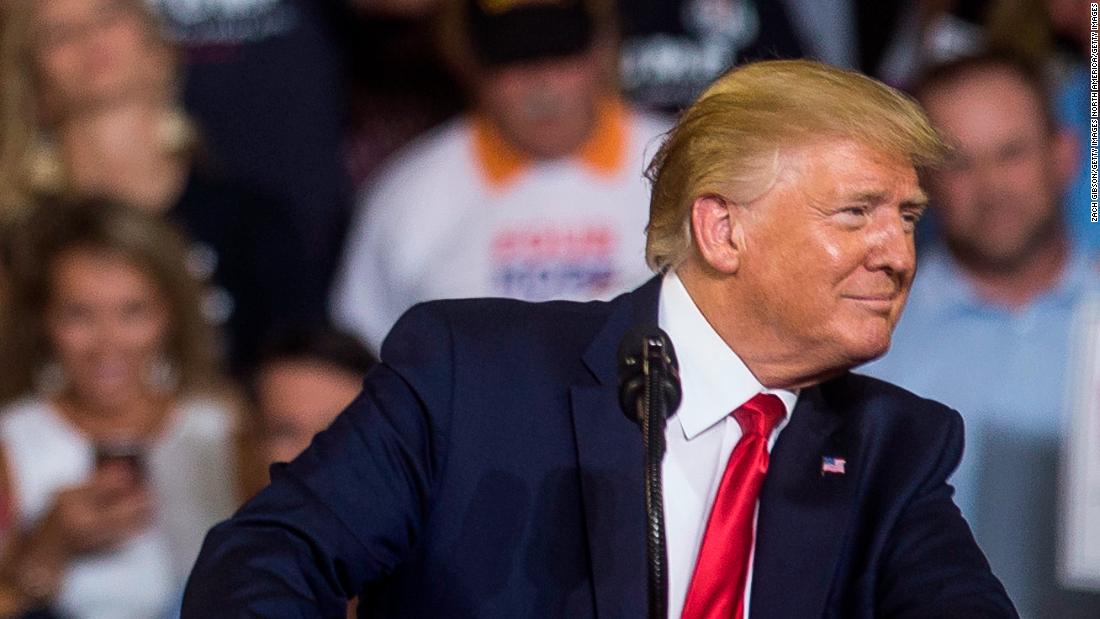 Trump is a dangerous media mastermind

Julian Zelizer writes that the nonstop coverage of Trump's racist tweets is exactly what the President has hoped for, because regardless of how the stories evaluate him or his supporters, the message itself keeps circulating in the public square.

With CNN at the helm of untruthful opinions.

Even after 266 days in office, the news media mistreats Trump — and voters...

President Trump has been in office for 266 days. He never got that traditional press honeymoon. The nonstop coverage instead is filled with fake news, tweaked polls, false narratives, weaponized talking points, personal insults and incendiary...

My own post has been dismissed because it was an “opinion.” I never noticed how many opinion pieces were posted in the past by Reg and never questioned. I guess if the media and Reg can get away with it, why not. I suppose I’ll have to pay closer attention to what is posted in the future if it irritates me that bad.

Do you understand the difference between a clearly labelled opinion piece and a news story.

Yes, we spell it labelled in Canada.

Throughout its history, The Washington Times has been known for its conservative political stance.[6][7][8][9] It has drawn controversy for publishing racist content, including commentary and conspiracy theories about United States president Barack Obama[10][11] and support for neo-Confederatism.[12] It has published material promoting Islamophobia.[13] It has published many columns which reject the scientific consensus on climate change,[14][15][16] as well as on ozone depletion[17] and on the harmful effects of second-hand smoke.[18][19]
from Wikipedia

I suppose I’ll have to pay closer attention to what is posted in the future if it irritates me that bad.

Or better yet, pay closer attention to who you get your information from.

This made me chuckle. The West’s take on WW2 is one of the most politicized things on the planet. 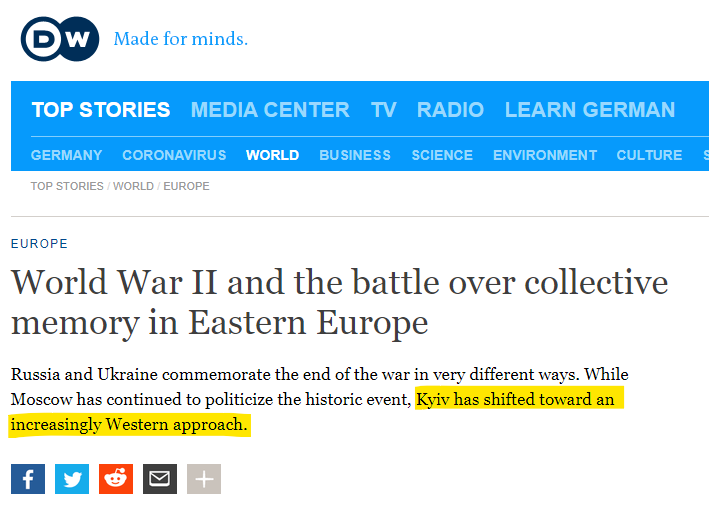 Would you say a more liberal approach?

I have an idea. How about we practice critical distancing.

well done, most of the time the answer is indeed already known to you;) 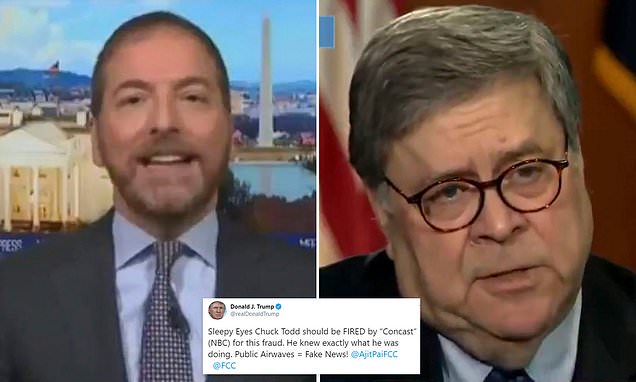 “‘Well, history’s written by the winners. So it largely depends on who’s writing the history,’ Barr replied.”

“Todd then added he was struck by ‘the cynicism of the answer. It’s a correct answer. But he’s the attorney general. He didn’t make the case that he was upholding the rule of law,’ Todd reacted. ‘He was almost admitting that, yeah, this is a political job.’”

“However in an extended clip, shown in full by CBS News, Barr is seen responding with further justification of his actions: ‘Well, history is written by the winners. So it largely depends on who’s writing the history. But I think a fair history would say that it was a good decision because it upheld the rule of law. It helped, it upheld the standards of the Department of Justice, and it undid what was an injustice.’”

This is the corruption our media spins out, all day every day. Poor, poor MSM. They consistently bury the truth with their own redacted version of current events and then lie to cover their tracks.

In other news, Dr Anthony Fauci just announced he will begin a modified self-quarantined, meaning he will stay at home and telework, wearing a mask continually, for 14 days. He said he might also go to his office at the National Institutes of Health. Isn’t this called hypocracy?

you forgot to mention what came next: “He said he might also go to his office at the National Institutes of Health where he is the only one there. He also will be tested every day, he said, noting he was tested yesterday and was negative.”

I also didn’t mention that he is going to testify before Congress as well. That fact that no one is there and he will be tested daily (and should be tested hourly) is a irrelevant. He should be called and called and called until he reaches for his phone and answers the call of his self-appointed badgering contact tracers.

yes am sure it is to some 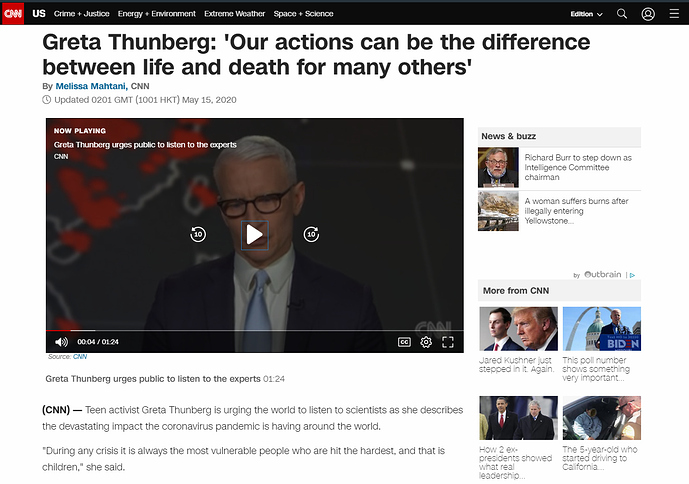 “During any crisis it is always the most vulnerable people who are hit the hardest, and that is children,” she said.

Actually, Greta, children are largely unaffected by this disease. Btw, you are quite irritating.

We can not have climate justice without gender equity.
—Greta Thunberg

We can not have climate justice without gender equity.

it’s the message that I question,