This is another interesting stand-you-ground case. The guy in the pickup truck is stalking his girlfriend, following her when she took an Uber. He cut off the Uber and got out of his truck approaching the Uber and was promptly shot dead. I’m not sure what I make of this one.

EDIT: After seeing this again, I am fine with it. The guy had obvious criminal intent to beat up the Uber driver. He took his chances and lost. Fair game.

“And they will shoot you a lot” lol

Ah, Sheriff Grady Judd. When asked why his deputies shot a cop killer 37 times he replied “We ran out of bullets”.

Could it get any funnier!!

Will do you live near this area?

It’s maybe 50 miles away. Lived there when I was a kid.

Do you agree with this shooting, Will? I do.

I usually carry when I go out. Especially at night.

I am generally anti-gun and I am happy Canada outlawed most guns 50 years ago, but if I lived in a place where everyone else had a gun, I would probably carry too.

It’s crazy here now Reg. Road rage, random shootings and on and on. Every. Single. Day.

I hear you. I read about it in the news. Don’t be a victim if you can help it.

Not if I can help it.

His girlfriend wasn’t even in that car. What an idiot. She was still in the bar. This guy is 34 and that’s how he behaved? I guess he never grew up.

Do you agree with the shooting, Dan?

The other guy that was pushed to the ground over the handicapped space has now been charge. He was not an elderly senior and was not crumpled to the ground incapacitated in pain as it may have appeared in the choppy video. He look like he folded back into a yoga pose and was clearly adjusted himself to an upright and aware position and took aim to a suspect backing off. He claimed he was slammed to the ground and fearful of being slammed again. But the guy was 4 steps backed off. Basically he approached a woman with 2 toddlers with a concelaed weapon over a trivial handicapped parking space when he looks just as physically able.

The other guy that was pushed to the ground over the handicapped space has now been charge.

I Googled. This is a terrible decision imho. I think he had every right to shoot that guy. 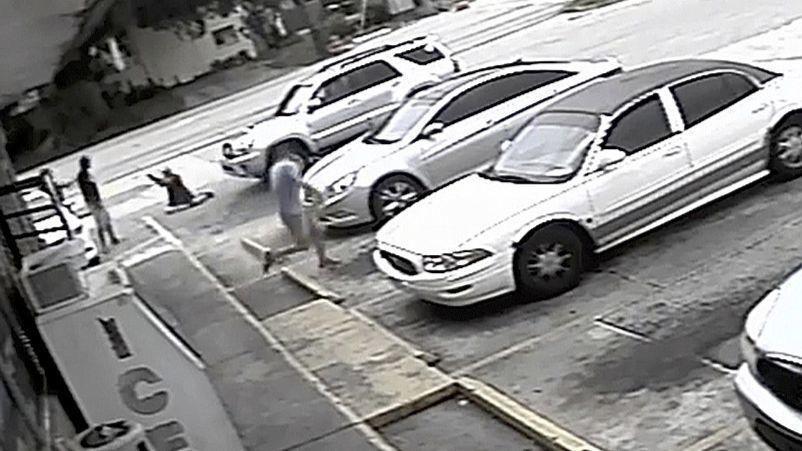 Shooter in 'stand your ground' case charged with manslaughter

Well, I AM an elderly senior and I would have shot to wound and then consider if I needed more.