I’m avoiding work by installing Neverwear Cloudready software on an old Intel PC Stick I have here. It will supposedly let me change that stick to Chrome OS. Should be interesting. I love the idea of Chrome OS but I’ve never tried it before.

I don’t know much about the OS but I know I love my Chromebook. My Chromebook is where my pearls of wisdom that trickle down to BBAD start from. You’re all welcome.

I am typing this from my new “Chromebox”, which is actually an ancient Intel PC Stick. It’s working well so far, however. Chrome OS is just a browser from what I can see. I’ll play around a bit.

This is actually quite amazing. This tiny little stick which was all-but-unusable under Windows is snappy and responsive using Chrome OS. It really doesn’t seem like I can do anything outside the browser but I am not sure I care. This thing is a totally usable web browser which is not nothing. I might just buy a monitor for it and leave it deployed.

lol its just a gimped linux distribution, there are many portable linux distros available… check out puppy linux its easy and will give you lots of options

I was impressed enough to act. Just ordered a Samsung Chromebook. I’m going to try this.

I just posted this in a FB Chromebook group. Reposting it here.

My first Chromebook arrived from Amazon today and I’m typing this on it. I thought I’d share a few first impressions.

It’s an 11 inch Samsung. I didn’t spend a lot of money as I wanted to evaluate Chromebooks before committing to them. My idea was simply that if Chrome OS works for me during this evaluation, I would get a Pixel Go as that device really appeals to me. If Chrome OS doesn’t work for me, I lose very little this way.

That approach made sense to me when I ordered this inexpensive Samsung but now that I have it here in front of me, I’m not sure it was the best idea. The screen is pretty bad, performance is awful and the camera is horrible. My upcoming testing would obviously go better if I had bitten the bullet and ordered something with a good screen and which didn’t lag so much.

That said, none of these things bother me enough to stop me from trying it. Build quality is excellent, as is the keyboard, and it doesn’t feel like a chore to use it.

Typing this post has been unpleasant because of the keyboard lag, however. I’m not a remarkably fast typist but I can easily get two or three words ahead of this thing. I’m wondering if it’s just Facebook, however, as I didn’t notice it being this laggy in other apps. Time will tell.

Setup was honestly amazing. I entered my google account and all my bookmarks were there. I installed a few favourite Android apps (an SSH client, an RDP client and so on) and was fully in business in under 10 minutes. Much of that was possible because of the prep work I had done in the last few years moving my work life to web apps, but it was still a far better experience than deploying a new Windows laptop.

I love the small size, and while I dislike the fact that this model doesn’t have USB-C charging, the tiny included charger almost makes up for that. This thing will significantly improve my backpack experience, being both smaller and lighter than my current Dell XPS.

Now the real work begins. I’m a node.js programmer and the idea of working on a Chromebook as my primary device has raised a few eyebrows among my friends in the business. Most expect me to go back to Linux or Windows. Adding to my challenges is the fact that I may have made a mistake by buying this cheap device. We’ll see how it goes.

I think buying an inexpensive chromebook was wise. If you want to poke around with chrome and see if it works for you it will serve your purpose. I am a fast typist and have the opposite experience. I am on an ASUS and I have no keyboard lag. On the contrary the keyboard is so sensitive that I spend a lot of time backing up to correct an entry I made just by slightly brushing a key. The charger is fine and I keep it on the table all the time. Battery life is good. Recharge time is good. For $250 I’m happy. The test for you will be if it is compatible with the apps you want to use.

That’s probably my issue. I spent $150. That said, I don’t hate this Samsung Chromebook 3. It’s slow using Facebook but adequate using almost everything else so far. I’m less than 24 hours in. I’ll give it a few weeks.

My Dell XPS13 finally died. I’ll need a new laptop when the world opens up. If the world opens up. I’m starting to shop a bit and I’m going to have to decide between Chromebooks and Windows. Apple devices are out. So are Linux devices. As is normal for me, I started jotting down notes on what I find appealing in each. 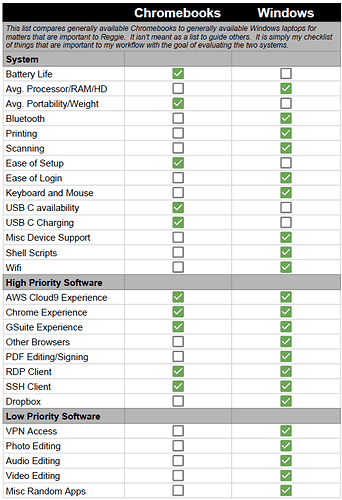 EDITED to add: I made a point of using my Chromebook exclusively today. I ran it until the battery died, which took an amazing 12 hours of almost constant use. That’s better by far than any Windows laptop I’ve owned. I’ve been charging it now for an hour and it’s back to a 68% charge. Equally amazing. The user experience was fine. There are a few things Windows is better at, no question. The battery life and light weight might just make up for those things.

why is battery life important or do you need a laptop at all if you are locked inside your home?

why is battery life important or do you need a laptop at all if you are locked inside your home?

I’m a desktop guy. In my homes I have big monitors and powerful Windows computers driving them. I have big, full-sized keyboards and mice and big speakers. This is my main method of operation and I have no plans to change it. A laptop for me is only a mobile device, to be used when traveling, so battery life is critical. Perhaps so critical that I may choose a Chromebook even though Windows handily wins the comparison I did above.

Re my preference for big desktops, I’m toying with going even bigger and trying a 47" super-ultra-wide when I’m back home. I had tried a 43" rectangular 4k screen a few years ago and found it too big and got rid of it in favour of my current 34" screen. While this is even bigger, it’s ultra-wide and I can split it into three virtual screens with a separate computer driving each third. I’m not sure it’s good idea but I have plenty of time right now to think of ways to improve my setup. 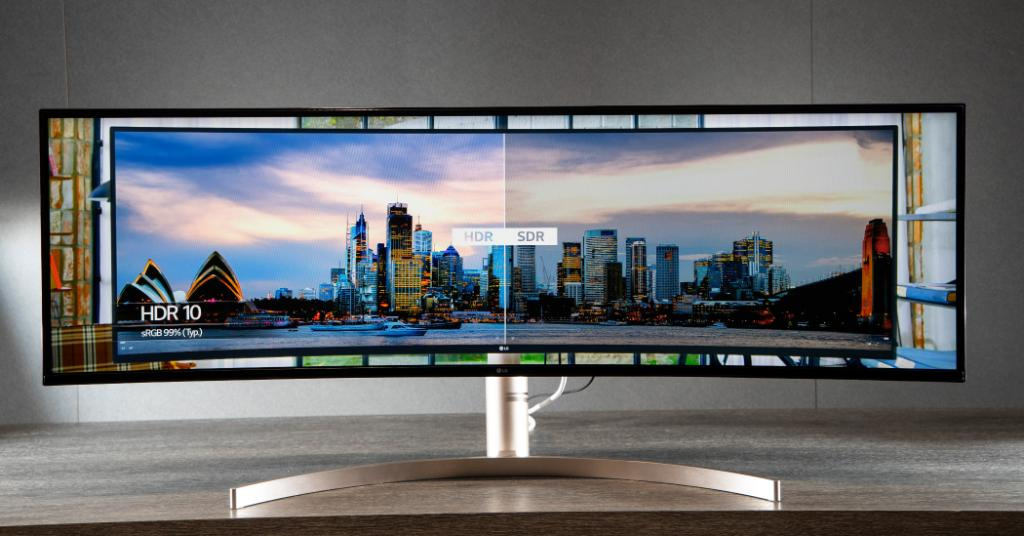 An iMac would be good for me.

I’m not surprised girls have told you they found you too fat.

Walmart’s prices on i macs are my hope.

Why do you want an iMac, Mark? Macs are for recent PhD grads who now work at Starbucks.

I have seen people who sit outside of starbucks over trash cans in belief they make the coffee as if they are coffee machines.

People act way too tough around coffee. I have been in line and seen people who demand refills with outside cups and restroom codes. Sometimes they order coffee and then defecate themsleves right there in line like they are being sacrifced by being crushed by a giant stone pillar or metal press. Over powered and empowered people who need to be disempowered or powered down.

Exactly. One iMac gives me pretty much every PhD and access to my own mind and mental faculties I have previously been shunted off from. I can learn and remember more than one way to tie my shoes.