I asked for and am receiving the beautiful lamp for Christmas. It will go on my bedside table. Angie seems to hate it. 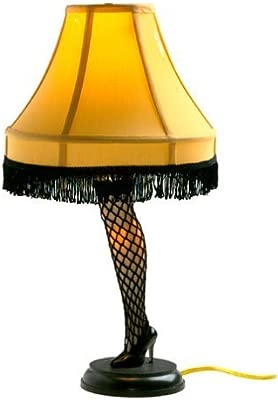 Angie seems to hate it.

I agree with Angie.
Merry Christmas, Will.

It’s a bit early but Merry Christmas, all. Will, Dan, Michele, Gunda, Daniel, Mark and anyone else lurking.

It’s only early if Jesus was, in fact, born on Dec. 25. Was he, Reg? I can tell you and God are tight.
Merry Christmas!

Well, I don’t believe he was ever born. I don’t believe a man named Jesus Christ ever walked on the face of the Earth. There is no historical record of his birth (or even his existence) outside the Bible, despite the Romans being meticulous record keepers. That said, in the unlikely event he was ever born, there’s absolutely no evidence whatsoever to indicate this even took place on December 25.

Here is one explanation of the date choice. I don’t know enough about the history cited to have an opinion on its merits.

At this time, the emperor Aurelian established an official holiday called " Sol Invicti " –
meaning unconquered sun, in honor of the Syrian sun god “Sol,” and also in honor of
himself, since the emperors were regarded as the divine incarnation of Apollo. This
holiday was held on December 24 and 25. And it more or less established December 25
as the official solstice. All other religions that worshipped sun gods also accepted
December 25 as a fixed date for their celebrations. And the major festivals of the
Egyptian earth-mother Isis were held on December 25, January 6, and March 5. The
earliest Christians assumed that Christ was born and was resurrected on the same day –
March 25 – which was assumed to be the vernal equinox. Later Christians celebrated the
birth of Christ on January 6, along with the festival of Isis. By the fourth century, many
Christians were referring to December 25 as the day of the “unconquered son” – in
defiance of the emperor, and January 6 was then called “Epiphany,” when either the
magi were supposed to have visited or Christ was baptized, or maybe both.

I don’t believe a man named Jesus Christ ever walked on the face of the Earth.

Jesus said, Even if you don’t believe My words, believe my works.
What do you think about His works, Reg?

There is no historical record of his birth (or even his existence) outside the Bible, despite the Romans being meticulous record keepers.

Hebrews have kept meticulous records since Adam and Eve. Don’t you disagree?

Also, can you explain this away please? It’s bothering me. The Roman historian and senator Tacitus referred to Christ, his execution by Pontius Pilate, and the existence of early Christians in Rome in his final work, Annals (written ca. AD 116), book 15, chapter 44. The context of the passage is the six-day Great Fire of Rome that burned much of the city in AD 64 during the reign of Roman Emperor Nero. The passage is one of the earliest non-Christian references to the origins of Christianity, the execution of Christ described in the canonical gospels, a...

The Roman historian and senator Tacitus referred to Christ, his execution by Pontius Pilate, and the existence of early Christians in Rome in his final work, Annals (written ca. AD 116)

Michele, that’s 116 years after Christ’s alleged birth (and therefore about 83 years after his alleged death). There are plenty of books about Christ written long after his story was told.

Good luck with that excuse Reg.

Rom 1:18-22 For the wrath of God is revealed from heaven against all ungodliness and unrighteousness of men, who hold the truth in unrighteousness; (19) Because that which may be known of God is manifest in them; for God hath shewed it unto them. (20) For the invisible things of him from the creation of the world are clearly seen, being understood by the things that are made, even his eternal power and Godhead; so that they are without excuse: (21) Because that, when they knew God, they glorified him not as God, neither were thankful; but became vain in their imaginations, and their foolish heart was darkened. (22) Professing themselves to be wise, they became fools,