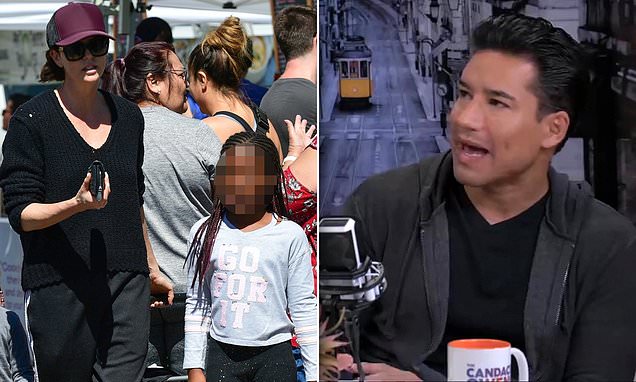 Mario Lopez is apologizing for controversial comments he made about raising transgender children during an appearance on the Candace Owens podcast last month.


His free speech was so harshly condemned that not only was he shamed into feeling he had to apologize for his belief but probably had to take off work to cope with the feeling that he is evil for it. Just an observation but very much the norm for those who disagree with the Left.
PC Gone Mad
AgeofGrace August 1, 2019, 11:50am #2

Here is a truth of the twisted belief of those on the Left here at BBAD.
As a supporter of a progressive and socialist far left-leaning party, you need to find a way to defend this child’s right to make an informed, educated, adult-like intellectual decision to transition while simultaneously condemning his/her decision as premature at an age when heshe isn’t mentally mature enough to make such a decision.

Don’t put words into my mouth, Michele. I don’t support child transgenderism in any way.

I also don’t support the ridiculous notion that a child can make an intelligent commitment to belief in a God.

Pick your side, Michele. Can children make these decisions or not? Right now you want it both ways.

Pick your side, Michele.

You pick a side, Reg. The middle is not a side. Pick another side.

No, I’m clear. Children shouldn’t make serious decisions. They are not yet mature enough to. When they do make decisions, it should never bind them as an adult. In such cases where they want to make decisions that would permanently affect them (such as gender change surgery), they should be forbidden from doing so until they are old enough to be considered adult. At that point, I may still consider their decision foolish but I respect their right to make it.

We will have to agree to disagree. I think they have every right to make any decision they want. And if they have the money to go out and make that transition, they have a right to make it.

So let’s be clear. You believe a 12 year old should be allowed to go cut his dick off because he now identifies as a girl as long as he has the money?

That’s very progressive of you.

Interesting role reversal here. I have the conservative position and you have the liberal one.

It’s not a liberal view. It’s very much conservative.

You believe a 12 year old should be allowed to go cut his dick off because he now identifies as a girl as long as he has the money?

I believe the vast majority of conservatives would disagree with your position above.

The vast majority of parents will see it my way. You can’t take your children’s thoughts away. You can’t put limitations on what they are allowed to believe, dream, hope and wish for. As a parent, you have support their belief no matter how far it is from your own. Money is the only thing stopping a kid from acting on some of those thoughts and beliefs.

Only if God tells them too.

I don’t know what you are talking about but I’ll walk a mile with you if you want to expand ion it.

On a side note, you know how you know that you know a good person?..if any of you have never watched Fox Business News in the morning, I encourage you to watch Varney & Co.

Even if I had all the money in the world, i wouldn’t let my children to change their gender under my parenting period. As adults they have all my support.

I’m with Ferni. I have no data but I’d be willing to bet most parents wouldn’t go along with their kid cutting off their privates. Wearing dresses and using a girl’s name, maybe, but not surgery.

My wife babysat a trans girl last year. She was 7. Born Male. No surgery obviously. Her name has even changed. You’d never know at this age. We shall see…

Would you permit a kid to do gender reassignment surgery if you had control, Dan? Will?

No. Not until after puberty.