I will no longer entertain your religious musings.

Why not. I entertained yours.

When you asked me to go get a dictionary.

It’s not nice to judge one and give the other a pass.

I am impressed that it bothers you, indicating you have faith.

I looked it up. Seems nobody knows. There is much speculation, however.

What is the ultimate reason God respected Abel’s offering and not Cain’s?

If you look at their names, Abel means “meadow.” When you look at meadow, you get “sown fields.” That’s another story for a different time.

When you examine Cain’s name, you get “Smith-spear” and “metal worker.”
The Bible says Cain was a tiller of the ground. What’s wrong with being a farmer? Nothing. When Noah came out of the Ark with his wife, sons and their wives, he farmed.
So to some degree, you have to consider their daily life. Abel was out in the field everyday, feeding and tending to livestock.
Cain was spending his days (probably sitting) fashioning metal into tools for tilling the ground. Like a whittler who sits and whittles on wood, thinking about all he can do with the tool he proudly creates with his own hands, Cain was subconsciously fashioning weapons into tools for war and God exposed that in Him before Cain killed Abel.

I looked it up. Seems nobody knows. There is much speculation, however.

LOL. You aren’t meant to know these truths because of your standing.

The Bible can be thought of as the Progressive Revelation of God, specifically His Son Jesus Christ.

Therein, we see a picture of Abel giving the first, best of his flock as a blood sacrifice. Cain brought the fruit of the cursed ground, the work of his hands, like you Reg, he thought he could make his own path and could earn his way and somehow deserved to be a judge in the matter, like a little god.

God gave His best, His only Son, called a sheep for the slaughter, who willingly gave His blood as a gift and a sacrifice that came from above rather than the ground. But, I would not expect unbelievers to see this picture and how it fits together with the teaching of the Bible…

God literally walked with them so faith was never an issue.

Then Adonai said to Cain, “Why are you angry? And why has your countenance fallen?If you do well, it will lift. But if you do not do well, sin is crouching at the doorway. Its desire is for you, but you must master it.”
Genesis 4: 6-7

Knowing what was in Cains heart, God gave him guidance and a warning before allowing Cain to choose a destructive path.

After Cain sinned and God punished him, God protected him. Why?

Cain said to Adonai, “My iniquity is too great to bear! Since You expelled me today from the face of the ground and I must be hidden from Your presence, then I will be a restless wanderer on the earth—anyone who finds me will kill me!”

15 But Adonai said to him, “In that case, anyone who kills Cain is to be avenged seven times over.”

Even though God showed love and mercy toward him, Cain showed no remorse. According to the Word we are given here, after taking an innocent life, Cain’s only selfish concern was for his own life. In juxtaposition with King David, Cain’s failure made him prideful and separated him from God.

Then David said to Nathan, “I have sinned against Adonai.”

David was sorry and had deep regret for what he did wrong. Expressing desire to learn from his mistake.

Go into your closet and pray.

Michele, why don’t you start a bible thumpers thread so people who aren’t interested can avoid having to see it.

Why don’t you go back to bed so people who
aren’t interested can avoid having to read you.

Because, unlike you, I have responsibilities.

I started planting a bed along the border I share with my neighbor. It’s a work in progress. Anyways. I wanted to put a copper bird bath at the end of this bed. My wife doesn’t want me to because the has a fear of birds. I’m not kidding. She avoids the beach, because of seagulls. She thinks the birdbath will be too close to the hot tub, which is inside the privacy fence on the right. 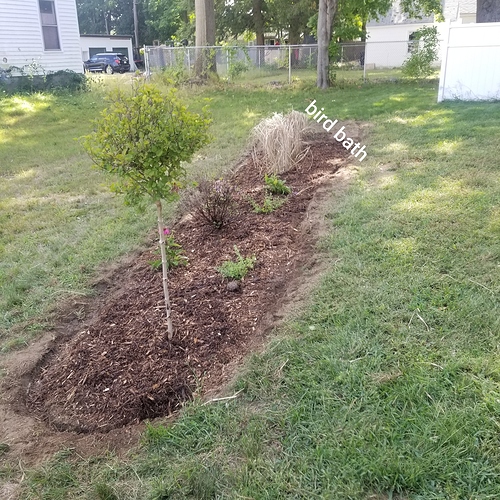 lol. Your woman sounds like a nut. I’m not judging, mine is too.

What if I don’t put any water in it? Is that mean to the birds?

On this topic (and probably only this topic) you might envy me. My woman made me promise we could put up a bird feeder on the balcony when we get back to Vancouver. She can listen to a bird without seeing it and tell me its latin name and tell me everything about it, including what color it is, and if we see it fly away a few seconds later, she’s almost always right. Her biggest hangup about Canada is we have less biodiversity than Colombia.