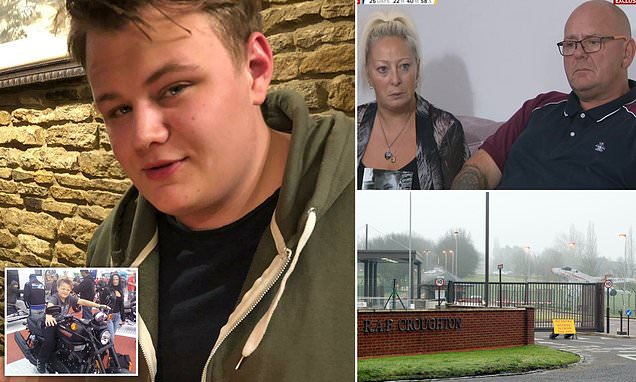 In a statement on Saturday, police confirmed that the 42-year-old American woman suspected in the August 27 death of Harry Dunn, 19, has returned to the U.S.

Outrage in UK as US REFUSES to waive diplomatic immunity in death case.

I’m not really outraged by it but it bothers me that this American woman has a light on her and her behavior is reflecting on our already seriously mentally disturbed country.

If Reggie was king of the world, I would force the Brits (and everyone else) to drive on the correct side of the road. This woman was clearly in the wrong but what is the possible point of putting her in jail?

I’m not really outraged by it but it others me that this American woman has a light on her and her behavior is reflecting on our already seriously mentally disturbed country.

trumps behavior is much worse and is worldwide. I am ashamed of him.

I don’t think we should have diplomatic immunity anymore. For any country.

The only issue with that is there are lots of countries where criticizing the government gets you thrown in jail. I definitely agree the industrialized democracies of the world should abolish diplomatic immunity among each other, however.

It turns out Audi has the rudest drivers. I figured it would have been BMW, but they pretty much came in 2nd. Korean car drivers were the most honest/nicest. As well as Volvo. I didn’t realize anybody drove volvos nowadays. They aren’t around here at all.

We have an unusally high percentage of Subarus, due to their ability in the snow.

Michele. You are concerned that the USA looks bad because this woman killed a man driving on the wrong side of the road in England? I think the rest of the world has higher priorities in their view of us than this bad driver.

Or are you talking about how the USA is handling it?

I have found that volvo drivers are very slow as well. We drive like maniacs up here, so they are a rarity.

Michele. You are concerned that the USA looks bad because this woman killed a man driving on the wrong side of the road in England?

Or are you talking about how the USA is handling it?

I thought I emphasized my concern. It is disappointing that our government would reject a waiver but not so much that I want to do away with immunity all together. The responsibility falls on her first and she expressly stated she was not leaving the UK.
If you were as willing to hold our government accountable for the 2016 election corruption against a presidential candidate as you are of holding our government accountable for refusing to waive immunity, our own higher priorities would already be addressed.

I think the rest of the world has higher priorities in their view of us than this bad driver.

Yes I’m certain they do, as we all do. There is no higher priority than exposing the malfeasance of the intelligence community and the Obama administration.

I possess a privilege in this thread. Not sure why this one.

Some Australian gets high on meth and gets pulled over for going 140km/h in his Porsche. While arrested, he takes a piss on the side of the road and a truck veers into the lane caused by his disturbance and kills 4 cops. Now, I don’t think a cop life is worth any more than any other life and I dislike the general gushing whenever a cop gets killed but these four were doing nothing wrong and certainly didn’t deserve to die.

Anyway, while one of the cops was lying there dying, the pleasant Australian on meth goes over and gives her hell for having ruined his car and his plans for having sushi. She died shortly after this.

“There you go. Amazing, absolutely amazing. All I wanted was to go home and have my sushi and now you’ve fucked my fucking car,” Pusey allegedly said.

Richard Pusey was charged with 10 offences, including speeding, reckless conduct and drug possession

“pusey allegedly fled, before asking a witness for a ride to his home suburb of fitzroy. he was arrested the next day.”