As I get older and continue to indulge in my self destructive habits I look back on my life and reflect on my experiences and the influence they have had on my life. Generally speaking, I have always been willing to jump into the abyss. Flinging myself from safety into the unknown. It was the leap into whatever awaited me that was the attraction. I have come to believe that. In that moment there was hope. A renewal. A challenge. A chance to renew or reinvent myself.

When I was about 9-10 years old my friends and I would ride our bikes, exploring, and we would find new places. Once we came upon a wooded area with a small stream. Near the stream there were bees. My friends wanted nothing to do with bees and we left. I later returned, squatted next to the stream and held my hand out. A single bee came and lit on my hand and stung. Of course the bee dies after the sting, so he left my hand. Presently another bee lit, stung and left. Over a few minutes time, a bee would light, sting and leave. I probably took about a dozen bee stings before I left. I never told anyone. What strikes me now, looking back, is there wasn’t a swarm of bees attacking me. One came, stung and left. Then the next and so on until I left. I don’t know what (if anything) to make of it. Just a snapshot in my memory.

Fast forward 20 years and I am plummeting to earth from 13,000 feet. Only in the first few seconds does it feel like falling, and I am definitely falling. I accelerate to terminal velocity. Terminal velocity _ the constant speed that a freely falling object eventually reaches when the resistance of the medium through which it is falling prevents further acceleration. In my case 120 mph. Sixty seconds before I pull the ripcord. One full minute of knowing I am safe and can enjoy the view. Now I feel the rush of the air tearing at the skin of my cheeks, the altimeter on my wrist is unwinding. I have control of my body. I see the earth getting closer by the second. I have time.

I am 21 years old. Fresh out of the Navy, I packed up my VW van and drove from Tampa to California where I had made friends the year before. It was to be the summer of scotch. An acquired taste. I worked at It. A fifth a day toward the end. It was there at 22 years of age that I emptied the medicine cabinet of a friend and woke up in a padded cell.

Going for evening chow. Walking down a narrow passageway (as they all are on a ship). I hear commotion behind me. The lead man shouting loudly “Sir! Gangway! Prisoners sir!”. Here they come. About 12 sailors led and followed by marine guards. Coming from the brig. In their left hand, held at shoulder level, they have a spoon. Their right index finger is hooked into a belt loop of the man in front of them. Marching nuts to butts. They stomp their left foot as they march. I press myself against the opposite wall to let them pass. Stomp! stomp! Sir! Gangway! Prisoners sir! Their heads shaved close. It unnerved me.

Came back from liberty one night drunker than a lord and barfed all over the passage way. Went into the head, rinsed my mouth and hit the rack. Woke up to the screaming of some bos’ns mate. If I catch the SOB that did this I’m gonna blah, blah blah … rolled over and went to sleep. He couldn’t come into our quarters.

My earliest memory is from when I was 3 years old. My father was going to University of Florida on the G.I. bill. That would make it 1950. He rented an old wooden house on a large tract of land. Mr. Randle lived in a trailer down towards the highway. At Christmas he would give us a box of Peter Paul Mounds candy bars. I didn’t like them. The earliest memory was when I found something on my dick. I didn’t know what it was. I showed my parents. Holy shit! All of a sudden there was bustling about and gathering tools and medical supplies. It was a tick. I lay down on the couch and here comes my father with all these scary and dangerous looking implements and sits down by me. I freaked out imagining what was about to happen to my wiener and how painful it was bound to be and immediately started howling and trying to withdraw. I don’t remember how he got it off but it wasn’t painful. That is my earliest recollection.

When I was five I went to kindergarten at P. K. Yonge. At the time, kindergarten was a budding concept and my father was able to get me in. It still exists as the P. K. Yonge Developmental Research School on the campus of UF. The only thing I remember is running away from it one day. The teacher chased me around the building and into the surrounding neighborhood as I was able to give her the slip a couple of times. I was determined. It would turn out to be a sign of things to come. That is for later.

I ran away from a grade 1 field trip to a farm at age 6. They had the police searching for me and everything. I showed up at home a few hours later and said “it smelled like shit there”. We have some things in common, Will.

Will always has a way with words. Whether it is 4 words or 400 words. There are a lot of shitty writers nowadays. Or people that can’t articulate. Or have nothing to articulate. Our young 20 somethings are bored at work. I told one of them to daydream or talk to herself. I do that when I’m bored and if you can find yourself interesting, you won’t get as bored. I didn’t tell her that, but when I have nothing to do, I usually think or talk to myself and thankfully my brain is unique enough that I’m never bored alone. Probably why I was happily single and lived alone for 5 years. 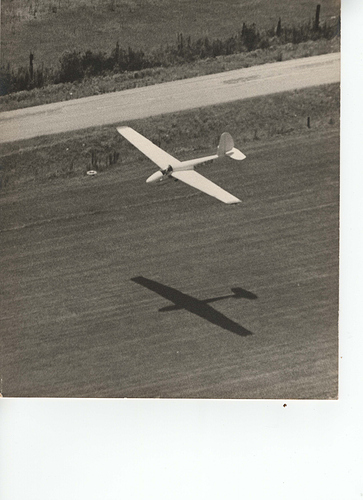 Landing a Schweizer 1-26 at Circle X airport in Florida.

A small single place glider with a 1:26 glide ratio. A fun airplane to fly. Basic stick and rudder.

I first saw one in the movie “Then Thomas Crown Affair”. He was landing his plane at just about the altitude I am at in this photo and he did a loop. I was blown away and started instruction not long after. The only place to do this at that time was a little hick town named Mulberry where two lesbians had opened a glider port and were teaching people to fly.

(I have to stop and save. This keyboard is such that if I miss a stroke with my pinky I lose everything).

It was challenging, a little scary sometimes, but always rewarding. I worked there as a lineboy for awhile. Doing airport chores in exchange for flight time and instruction. Moving planes around, tying them down, splicing tow ropes, hand propping the J3 cub towplane, etc. I flew in thermals with hawks and buzzards who would pass me like I was standing still. Getting a boot in the ass from a 1000 fpm updraft.

Eventually I got my license in gliders. One chance to land. No go arounds. The 1-26 was a beautiful fit for me. The wings were exactly at the same position as my shoulders and it felt like I was wearing them. Landing gear was one tire directly under my butt. It was about the size of a wheelbarrow tire. Officially it had a brake which was applied with your tows pressing both rudder pedals, but to call it a brake was blasphemy. It never worked. With wings as an extension of my arms and the butt-tire for my feet everything felt right. (stop/save)

Doesn’t ctrl-z get you the paragraph back? It should. Sometimes you have to type it a few times.

Didn’t know that. Will try that. It has happened several times when I am reaching for shift with my right pinky. I’m on a chromebook. Not sure what I’m hitting.

Ctrl-Z is the universal undo key. I hope it works. And you can usually undo multiple steps with multiple presses of ctrl-z. If you undo to much, ctrl-shift-z is the redo key to go the other way.

Are we finally done here?