At the end of the book, there is this conversation between

Why didn’t Mond chose the uncivilized island, but being a leader of the SJW gender-commie-world, a leader? The story doesn’t tell much about his decision.

Mustapha Mond knows of all the stupidity and senselessness of the system’s well organized, yet totally devoid of natural creation and god’s will.
Proof:
“If it was new (of the system), it couldn’t possibly be like Othello”
“we have stability”
“idiotic - writing when there is nothing to say - precisely”

He has all the necessary books to obtain infomation about the ancient way of life and about god’s will and the society he lives in doesn’t even seem too attractive to him.

Mond gives a hint (and I read “religious tribal life and traditional or free life”, everything pre-NWO for science as it fits much better today)

We? He identifies nevertheless with the system.

I like your spirit […] indeed, as much as I officially disapprove of it

Though he doesn’t seem to be really convinced by the spirit of the system and his own working position.

even more interesting are Mustapha Mond’s views on god.

“I was forgetting [about god]”
[The holy Bible] that has always had a great interest for me.

[the books] are about god hundreds of years ago, not about god now.

only a fool would say a thing like this. Everybody knows we are losing our ties to our creator and might lose him and his favor at all! There is no “god of now”, only an eternal god…

he [god] manifests himself as an absense [nowadays]

We got youth and prosperity right to the end […] we can be independent of god. The religious sentiment will compensate us for all our losses, but there aren’t any losses [in this new shallow utopia] to compensate.

He doesn’t really know god besides having read the bible! He misses all the joyful encounters with god entirely!!!

I never read Huxley (or I’ve forgotten, it’s been a long time). I should. I don’t think I will this week. I’m too stressed over being stranded. I might try to read Brave New World this summer though.

I still don’t see enough conviction in Mond to occupy his high-demanding leading position in the system.
He puts much weight on “stability of society at all cost” as a value though.

Is he mainly driven by convenience?

Mustapha Mond: " we don’t [like the inconvenciences}, we prefer to do things comfortably."

He does never say “I” as if he already incorporated the system’s spirit too much. Has intelligent Mustapha Mond sucked up their propaganda entirely?! I mean, we all know convenience VS. demanding life. But Mond doesn’t also sound “red pilled” when he talks.

Still not seeing Mond convinced. I wonder whether his concious or god will haunt him at night and wether he makes plans to hit for an island in secret…to the clan/tribe of his own choice

I might try to read Brave New World this summer though.

I didn’t like the way it is written, but I had to read it to know better the personality of Mustapha Mond, the only one in the book who had a true choice (Savage John grew up biased on the one side, Helmholtz and Bernard single sided on the other side).

There also is a superb audio-book with “mood-effects” and background ambient sounds by “Steve Parker”.

There also is a superb audio-book with “mood-effects” and background ambient sounds by “Steve Parker”.

i can see humour in a lot of things, but not in people suffering and racism is never cool

You will dislike the hospital scene of “Brave new world” then…

Lots of old lit is racist and sadistic. The most racist stuff I ever read was Edgar Rice Burroughs’ Tarzan. It was pretty sadistic, too.

I saw this and thought of you, Daniel. I’m not sure why since you’re not an anarchist but whatever. 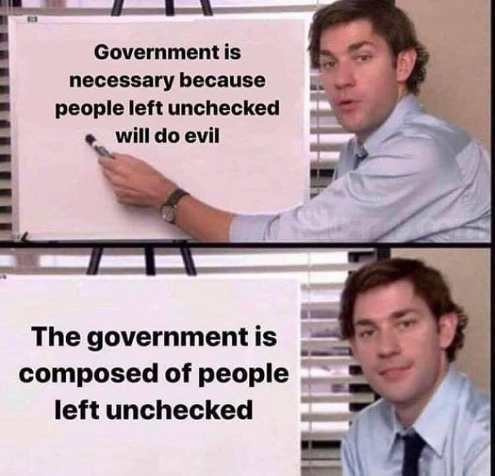 I’m not sure why since you’re not an anarchist but whatever.

My ideal form of government should be like a currency e.g. Bitcoin.
One You can freely chose from, to each its own, but like Bitcoin, you subscribe to the rules then. If it doesn’t suit you, use another cryto, use another FIAT or use silver coins. Or create your own.
This will also pose less danger of fatality - if one group fails, join another.
With “right-of-the-strongest” globalization, if one thing fails, ALL is lost. Pure cluster risk.

With top-down gov like EU or a Bill Gatian world government however, my ideal form of gov. will be less and less possible meaning people be sovereign about their issues. A sad thing. It seems as if the world is heading for this Huxley’s choice of all or nothing:

Goat farming is next on my list now after circumcision. Heading for option “Island” here…as with the circumcision decision not in a hurry, but thoroughly…

It’s not going to come to that. We aren’t going to go back to horse and buggy days. Technology has advanced the world and the Bible confirms the state of the world in our future.

There are more “Amish-copycat” groups out there than I thought.
But Reg, as always, has been very right about stuff when he posted one time or another:

Basically, I am having the Mustapha Mond choice and I hate it, too.

My character has huge problems fitting in socially in groups

You both seem totally different on the surface but you actually have the same issue as Nico. You are both purists. You seek simple solutions to complex problems.

PS: Did you really mutilate your penis? I hope Nico does that, too.

comparing someone that believes that white people are superior to someone that doesnt want any dog killed is an interesting but insane thought;)

Well, I have to admit, that Mr. Clayton Bigsby is more consistent on this issue which is why I envy him a bit. He filed for divorce (what one shouldn’t do of course) because he found out her being a quote unquote “ni**er-lover”.

I don’t know. I have other problems, too. I am easiliy frustrated when a group pressures me in doing things out of religious/ mere group pressure reasons, I would not do on my own. Well, I am a loner seeking for a high control group a.k.a. a clan. What could possibly go wrong…

PS: Did you really mutilate your penis?

Do You urgently need more pics of “Mr. P”, the beautiful masterpiece of godly engineering with a man-made finish? You took a liking to “Mr. P”, huh, I mean who wouldn’t. Yeah, I can sense it, you asking for it, like the guy asking Steve Ballmer to show some enthusiasm for web developers on stage??
I go so far as to say that “Mr. P” developed some kind of personality in the process. I lately find it more interesting talking to him than to the bulk of lemmings.
There are also things to learn from “Mr. P” for me, as he likes things nice, soft and clean. The only problem with him being him wanting to breed and fertilize everything, so I always got to talk him out…“No, no Mr. P, we are White Power” or “no, no Mr. P, that girl is trouble/ a lemming/ unclean/ not chubby enough”.